Providing support for entrepreneurs and business owners to overcome the challenges many small businesses face.

NuMedia Marketing was founded in 2006 bringing enterprise solutions to small and mid-size businesses throughout Central Indiana and across the country. Our passion for quality, cost-effective marketing quickly attracted many startups and small-businesses just as the economy tool a down-turn.  Despite the challenge, we learned to thrive with our commitment to excellence while many competitors struggled to survive and we shared these insights with our clients. We also began providing additional services at no additional cost to select client who demonstrated a similar commitment but simply lacked the resources to work through critical business transitions.  Our own resources were limited, but the give-back to these clients provided critical support for their success.

The practice continued and we developed formal internal structures to refine the process while holding our own resources accountable to maximize the impact of our investments. NuMedia Marketing has donated more than $260K in goods and services to well-deserving businesses since the program began.  And we’ve been blessed to see some tremendous results:  growing a business earning less than $15K to exceeding $160K in less than two years, enabling business owners to leave successful careers to find even greater success working on their own business full-time while spending more time at home with family or helping local businesses gain national exposure against competitors with deep pockets are just a few fine examples.

I quickly realized that as the company founder my own success has been due to so many others who have invested in me personally throughout my lifetime.

Surrounding myself with good people has always been a blessing and I’ve often seen them give not from excess, but in sacrifice.  There are so many people who deserve my personal thanks and whose gift of time, education and experience are shared through this program. There is one family, however, that seemed particularly fitting to be associated with this program…

“Greater love has no one than this, that one lay down his life for his friends.”

On Tuesday, August 31, 2010 former Marine pilot Kenny Robertson died in a helicopter rescue flight near Clinton, AR. Kenny Robertson served as Cadet Major for the Cadet Corps while attending Texas A&M University, graduating in 1998 before serving 10 years in the U.S. Marine Corps as a distinguished pilot where he served in Kuwait and the Middle East. He eventually returned to his hometown of Searcy, Arkansas in 2008 to serve as a medical evacuation pilot throughout the state.

I was fortunate to visit with him in person only a few weeks before the accident and when I asked what he found most rewarding in his civilian career he said, “I’m able to fly out with only minutes notice to help people in what may be the most critical moment of their life. I may never see them again and they may never realize it, but I get to serve them in that moment.” If you knew Kenny or have spoken with anyone whose met him, you know that he made a difference in so many lives whether they were in that critical moment or not.

More about Kenny in a few words I shared during his services...

But this life isn’t about fair. It’s not about you or me… or Kenny. And he knows that.

My life-long friendship with Kenny started somewhere around the largest Lego collection I had ever seen at the time and we’ve been building together ever since. Soccer, scouting, football, golf, youth group activities, devotionals, sleep-overs… the list goes on and on… and the memories coming flooding back when I least expect it this week.

The Harding Academy Class of ’93 shared a particularly special bond. It’s evident today by the number of classmates present and so many of those that are unable to attend who have gone out of their way to express their love. Kenny was truly his own man and a leader among us. It was often expressed by his independence and “go-for-it” attitude in situations.

We were preparing for some long-distance running in the football off-season with Coach Rine and Coach Barden one year and absolutely NONE of us were looking forward to the upcoming track season. We had nothing against a good work-out, but our minds were on football and someone asked if we were “REQUIRED” to run track that year. (For those in the room that didn’t attend Harding Academy, being both a football coach and track coach had some distinct advantages.)

Coach Rine was quick to reply, “Do you want to play football?”

Only a moment passed before Kenny said, “Well… I guess we run!”

It didn’t really matter whether or not the rest of us agreed. To this day I still believe a simple “Yes” would have been an appropriate response, but that was the end of the conversation and Kenny was off to do his best.

Other times his independence was expressed by the goofy way he literally “jumped” in the air when he was happy — I’d actually forgotten all about that expression. Kenny lived what he believed whether it was the popular choice or not. He wasn’t concerned with what was “fair” or popular opinion. He was concerned what was “right” and “just” as he looked toward the interest of others. He is a true friend and we’re all better people for the leadership he contributed to our class.

Those that have kept in touch with Kenny since graduation recognize his love for Angie and their 3 children. They were often the foremost topic of conversation and they, too, are especially dear to us. As Kenny and I swapped school stories recently we recognized once again how well our parents supported us and the life-lessons stressed by each of our coaches throughout the years. We want no less for our children. Several years ago I came across the life story of William Borden and incorporated the words left in his Bible into my personal coaching philosophy. If you’re not familiar with the story, it’s worth a quick read but I find these final words particularly appropriate this morning:

No reserves. Kenny gave his best in whatever he committed to do.
No retreats. His commitment was unwaivering. He never backed down.
No regrets. He lived the legacy of Jesus Christ.

Ultimately, there are simply far too few words to express how dearly Kenny is missed and how thankful we are to have shared so much of our lives with him.

Soon-after his passing I realized my lifelong friend, Kenny, his Father, Marvin, and his mother, Roki, contributed to so many of the core principles, mindset, computing and business acumen contributing to the success of NuMedia Marketing.  Their influence is so far-reaching I can’t begin to convey all they have given to me, but you’re welcome to ask me about it anytime. It is my sincere honor to recognize the Robertson family in memory of Marine Pilot Captain Kenneth Sando Robertson with the Robertson Business Development Program.

The program remains an active part of NuMedia Marketing giving back to our community and while it is not a participation requirement, it often directly supports business owners having served in military and public service. The services provided are not rendered for recognition and participants in the program are not advertised. We give not from excess, but in sacrifice.  It’s often a thankless job of extra time, late hours and last-minute efforts to ensure client success. And it pales in comparison to those who sacrifice so much as my dear friend, Kenny Robertson. 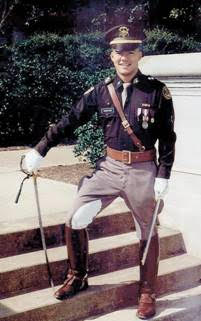